Totems of the Self 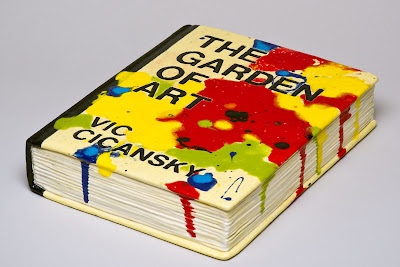 At first glance, Victor Cicansky's books seem to constitute a motley autobiography, a multivolume Song of Myself:  "My Life With Clay", "My Garden Palette", "Regina: My World", "My Bronze Age", and so on. The titles point to two of his central preoccupations: the cultivation of gardens, and the making of art in clay and bronze using "My Colours" – glazes and patinas. Like Joe Fafard, his colleague from the days of the Regina Clay scene, Cicansky has a mischievous talent for befuddling the eye of the beholder. Even his bugs are ironically comedic, having exercised their "biting" wit upon the volume entitled "Control of Insect Pests".Upon seeing the damage inflicted by these trickster devourers, I was reminded of Bacon's famous dictum that "some books are to be tasted," while others are to be chewed and digested". 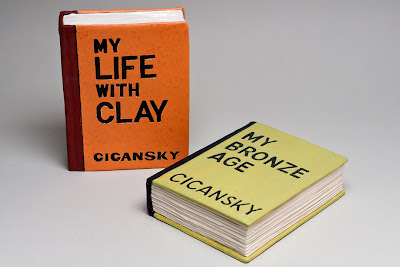 In literary works there are significant differences between an autobiography and a self-portrait, and it would be interesting to pursue elsewhere the question of whether or not similar distinctions apply in the visual arts. For the moment, however, I wish to focus on the clearest and most basic distinctions between Cicansky's books and the universal idea of "the book" as collated information printed on paper and bound between boards.For even without the benefit of Cicansky's background notes, the viewer understands that these volumes and their titles stand for passages or "chapters" in the life of the artist. But of course, Cicansky's books are not books in anything other than their outward appearance, which in fact belies their true nature. They are simulacra – conceptual representations of what Cicansky's autobiography might look like, if he were to publish it in book form.
– Dr. Eva Seidner 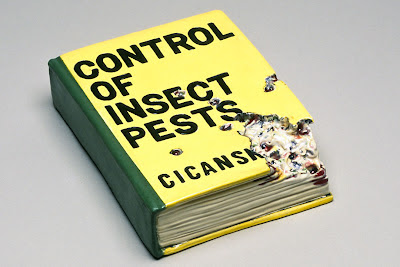 We are accustomed to thinking of the Great Books as somehow transcending the realm of existence in which their mortal authors and readers must dwell. But even a book whose ideas and mode of expression survive through many generations cannot endure forever as a physical object. By fashioning his books out of clay, Cicansky seems to underline their fragility and their connection to the earth, from which all things come and to which all eventually return, to come again as new forms in a new season.

Self-Portrait: A Small Library 2011 was part of The Self-Portrait Show, the 50th Anniversary Exhibition at the Mira Godard Gallery in Toronto from mid-March to mid-April. Excerpts from "The Patient Labyrinth of Lines", the accompanying essay by Dr. Eva Seidner are ©2012, reprinted with permission.
Posted by Victor Cicansky at 7:19 AM No comments: