I’m sitting in the kitchen looking out at my winter garden. Recent storms have piled drifts upon drifts of snow covering most of the perennial stalks I left standing in the fall cleanup. The prairie sunflower, clumping grasses (Karl Forester, yes, that's the name of the grass), yarrow, a couple of rose bushes and tangled pieces of driftwood, tall enough to defy the drifts, poke through the snow.

Closer to the pond stands a lovely clumping paper birch, lustrous white in the bright January sun. Next to it half buried in the snow is a sculpture of the persistent and tenacious dandelion. In the icy pond cattails gone to seed are among the perennial survivors. 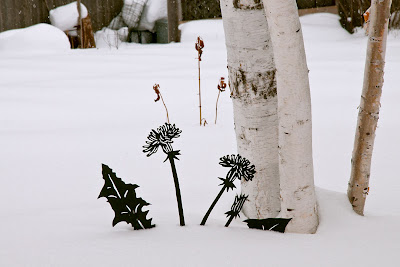 Bordering the pond, old weathered prairie bones I collected over the years, sit in a pile, reminders for me of Regina’s past as Pile-o-bone, a landscape still I carry around in my head. The pile-o-bones lie comfortably under the snow.


My fascination with the bones surfaced again when Reginians celebrated the city’s centennial in 2003. As I handled some of these old bones I was struck by the strong resemblance between the architecture of bones and plants. Vertebrae have the look of an exotic prairie amaryllis, limbs like stems and flat bones like leaves. In my imagination these bones were transformed into a garden of ceramic bone plant delights. Two of these sculptures sit outside my kitchen window radiating color in my snow drifted winter garden. 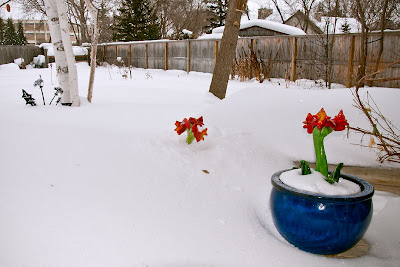