A Winter Trip to the Foundry

On February 1st, with afternoon windchill temperatures a mean -34°, I left for Calgary and the foundry where I have my bronze work cast. I phoned the highway hot line and was informed that winter driving conditions exist to the Alberta border: blowing snow, drifting and icy sections. It’s a winter drive and I carry extra clothes, a sleeping bag, food, water, candles and matches. I have good winter tires but I am still cautious about my speed. The panorama of snow and sky that unfolds before me is not exactly a winter wonderland; it’s a slow and difficult drive and it was a relief to see Swift Current through the drifting snow. I decide to stay the night. Overnight, the temperatures moderated somewhat, the wind died down, and the warming sun on the highway made for good winter driving to Calgary.

Next morning the bronze casting excitement begins. Bronze lost wax casting process has been around for long time and was known to many cultures as far back as 4000 BC. and has survived as medium for artistic creation .
There is something magical about the metamorphosis of a creation modeled in clay or wood and wax being cast into bronze. It’s a process that depends on the power of fire. Simply put, the original sculpture is invested in a refractory slurry, air-dried, the mold of wood and wax is burned out, leaving an empty refractory shell into which white-hot bronze is poured. With the investment (the shell) cleaned off, the bronze sculpture pieces of the original sculpture, sit in a pile on the floor of the foundry waiting to be assembled by the skillful foundry team and the artist. A patina is applied to the sculpture and then lacquered to protect the finish. 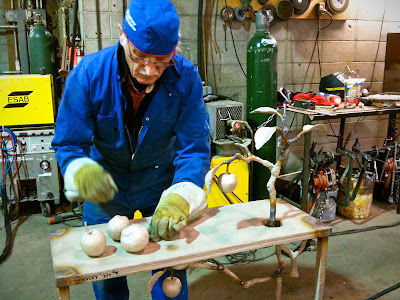 If the trip to Calgary was challenging, the return trip to Regina was even more so. I finished my work at the foundry around 2 o’clock Friday afternoon, had my van loaded up and was ready to go. The weather advisory from Environment Canada was not good. A big storm was brewing over the Cypress Hills that would affect Medicine Hat, Maple Creek and Swift Current, and would begin pounding the region with snow and freezing temperatures beginning Saturday afternoon. Rather than be snowbound in Calgary waiting out the storm, I decided to drive to Medicine Hat, stay the night and head for Regina early Saturday morning.
I was warned that the weather and the road conditions along the Number One could be unpredictable. It was raining as I left, but less than an hour out of Calgary the rain turned to hail, then it started to snow, which turned into rain again and continued to rain all the way to Medicine Hat. Unpredictable indeed! I stayed the night in Medicine Hat.
The Saturday report on the Saskatchewan hotline warned against unnecessary travel on a stretch of highway from Maple Creek to Swift Current that’s always unpredictable with blowing snow, icy conditions and most worrisome, black ice. There were patches that bore out the road reports but for most of way the driving was slow, and would have been uneventful but for the small herds of antelope along the north side of the highway. The pronghorn antelope is found only on the Great  Plains of North America and is so fast it can reach speeds of 60 miles per hour and can outrun any predator.
Stopped in Swift Current for a cup of tea to prime myself up for the final stretch of road. Surprisingly the sun was out, and the highway was mostly clear and hazard-free. Outside the town of Herbert I passed a moose munching on twigs and grasses.
I was feeling a bit hungry myself and determined that upon my arrival home, I’d stop at the new Orange Boot Bakery and pick up a warm freshly baked baguette, stop for a bottle of good wine, and along with the Applewood Smoked Cheddar in the fridge at home, I’d rest and celebrate another successful trip to the foundry. 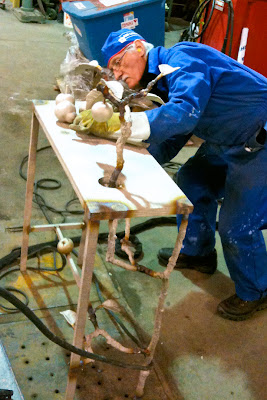 And finally, here is the finished table that I brought home from the foundry: 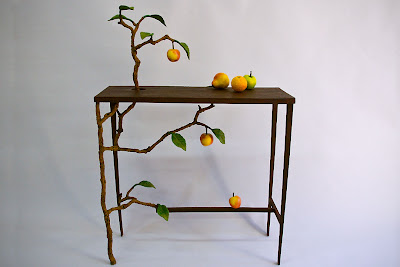 Posted by Victor Cicansky at 9:20 AM No comments: